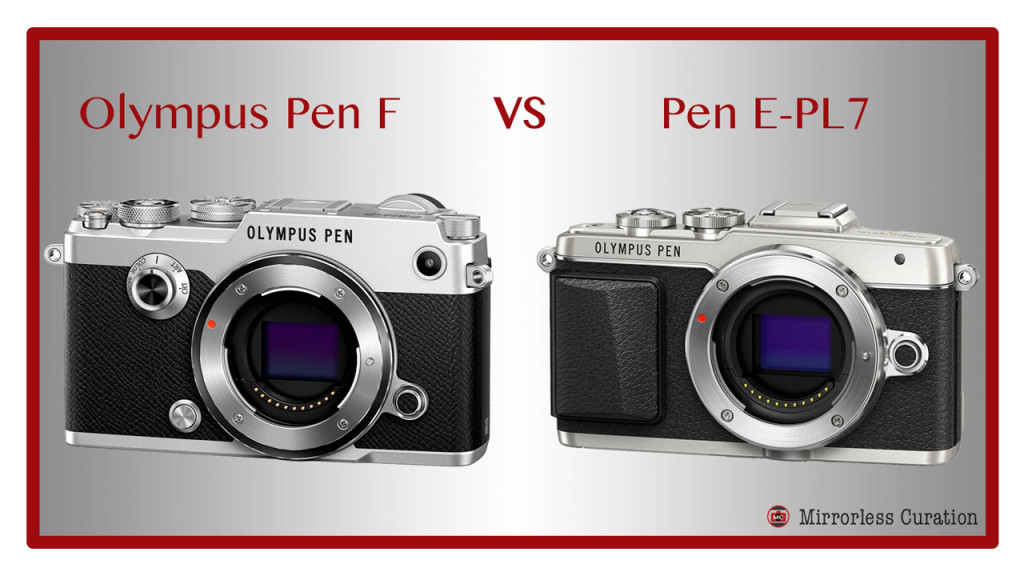 When the Pen E-PL7 was first announced in August 2014, many felt that Olympus was trying to revolutionise the Pen line-up, whose popularity had failed to match that of the OM-D series. Targeted mainly at women with an acute sense of fashion, the E-PL7 was a blend of good retro looks and functionality and incorporated many of the latest technological advancements at the time. However, due to the lack of a built-in viewfinder and 3-axis stabilisation only, it remained one level below the OM-Ds.

Now, a year and a half later, the even more advanced Pen F has arrived. Even though it falls into the ‘Pen’ category, it has all the technology of the high-end OM-D models. Really, the only thing that sets this new Pen apart from the likes of the OM-D E-M5 II and E-M10 II is the rangefinder design. (You can see our full specs comparison here.)

If you’ve been keen on owning a Pen, we urge you to keep on reading as we compare the specifications of the two latest models. Are they really that different? Let’s find out!

Ethics statement: The following is based upon official specifications and our personal experience with Olympus cameras. We were not asked to write anything about these cameras, nor were we provided with any sort of compensation. Within the article, there are affiliate links. If you decided to buy something after clicking the link, we will receive a small commission. To know more about our ethics, you can visit our full disclosure page. Thank you!

Looking at the specifications, it is easy to see that the Pen F is both bigger and heavier than the E-PL7. Both feature a classic rangefinder design with one key difference: the Pen F has a built-in EVF while the E-PL7 does not.

The Pen F will be available in both silver/black and black. The E-PL7 is a little more colourful, with black/silver, white and cream versions available. Neither metal body is weather sealed. Interestingly, the Pen F has been designed in such a way that you cannot see the screw heads holding the camera together.

Both cameras have a hot shoe for an external flash or other accessories. Neither comes with a built-in flash but you receive a small external flash with the kit.

It is fair to say that the Pen F has more external controls and buttons than the E-PL7.

Both have a Mode dial on top but the Pen F version has more customisable menu options called My Modes. It also has twin dials to adjust exposure (shutter speed/aperture), a dedicated exposure compensation dial, and a new creative dial that gives you direct access to the art filters, colour creator, and the brand new Colour and Monochrome Profile Controls. Magnification and focus peaking are both available. The E-PL7 only has one dial to change exposure.

The respective rears of the two cameras have more in common. You have the four-way control pad with customisable options and four buttons surrounding it (Menu, Info, Delete and Playback). The video record button is found on the rear of the E-PL7 but has made it way to the top plate on the Pen F. The Pen F has three dedicated function buttons on the body while the E-PL7 only has one.

Though the resolution of the 3-inch touchscreen is the same on both cameras, the Pen F has a vari-angle screen that is suited to video shooting while the E-PL7’s screen tilts 80 degrees up and 180 degrees down, activating a selfie mode.

One of the most significant differences between the two Pen models is that the F has a built-in EVF with a 2.36 million dot OLED screen and 0.62x magnification while the E-PL7 has none. This means you must rely on the rear LCD screen for your shooting unless you buy an external EVF like the VF-4. The Pen F has the option of a simulated OVF that expands the dynamic range of the camera’s EVF to make it behave more like an Optical Viewfinder.

Both cameras feature a Micro Four Thirds sensor that lacks a low pass filter but the Pen F has slightly more resolution at 20MP. Both are equipped with the same TruePic VII image processor.

The Pen F also has a setting inherited from the E-M5 II called High Res Shot, which composites 8 shots into one high resolution file. It equates to about 50MP (JPG) and 80MP (Raw). Since the technology combines eight shots, you must use a tripod and there must not be any movement in your composition.

The two models have the same contrast detection autofocus system with 81 area multi AF points. You have the option of: All target, Group target (9‑areas), Single target (normal), and Single target (small).

The fastest mechanical shutter speed of the Pen F is higher than that of the E-PL7 (1/8000s vs 1/4000s). What’s more, the E-PL7 lacks the silent (electronic) shutter. Both have an electronic first curtain (Anti-Shock 0s) options but you need to dig inside the Menu to find it on the E-PL7.

According to the official specifications, the Pen F has the “shortest release time lag between pressing the shutter release button and the actual shot,” making it faster than all other Olympus models to date, including the E-PL7. The AF spot metering can also be linked to the AF point on the Pen F.

Another important feature to mention is the in-body stabilisation, which can be found on both models and works for stills and video. The main difference is that the Pen F has 5-axis stabilisation with up to 5EV stops of compensation while that of the E-PL7 only works on 3 axes with up to 3.5EV stops.

Finally, both models have Face and Eye detect AF, which means that the camera can recognise and automatically focus on the face or eye of a person.

Video and other features

In terms of video features, the Pen F is more advanced than the E-PL7. It can shoot 1080p/30fps with an All-Intra compression option and 60fps with the IBP codec. It also has a clean HDMI out. As mentioned above, you can use the 5-axis stabilisation with video (M-IS1 or M-IS2) along with the vari-angle LCD screen. There is also a 4K Timelapse mode at 5fps.

The E-PL7, on the other hand, only shoots 1060p/30fps and uses 3-axis stabilisation for video.

As for the extra features related to still shooting, you get Live Time, Live Composite, Multi Exposure, Photo Stories, and various Bracketing modes on both cameras, as well as focus peaking and magnification.

One new feature the Pen F has is Focus Bracketing, which allows you to take a burst of shots and stack them later on in post-production. It also has an AF Targeting Pad that makes it possible to use the touchscreen while looking through the EVF.

The Pen F and E-PL7 use different batteries. The Pen F’s BLN-1 battery is good for up to 330 frames on one charge while the E-PL7 uses a BLS-50 battery and can take up to 350 frames.

Both models offer built-in WiFi and compatibility with the free OI.Share 2.6 app.

If you’ve read this spec comparison from start to finish, you’ll have realised that the Pen F and Pen E-PL7 share many characteristics but target different markets.

The Pen F, being more recent and packing much of the latest technology, is targeting professionals and advanced amateurs, and is meant to replace DSLRs or complement another OM-D body. The E-PL7 is less powerful and targets more of an amateur/enthusiast crowd.

Whether you should go for one or the other comes down to three main factors: your preferred photographic genres, the EVF and the price.

Since the Pen F has more resolution and a High Res Shot mode, it is better suited to landscape, cityscape and still life photography than the E-PL7. It also has more advanced movie functions. Likewise, the built-in EVF of the Pen F could be a deal breaker if you prefer shooting with a viewfinder. Finally, if you are on a tight budget, there is no question that the E-PL7 is the better deal. Its current street price is less than half the MSRP price of the Pen F.

Check price of the Pen F on B&H Photo

Check price of the E-PL7 on B&H Photo

Below you can find some interesting reviews about the two cameras: