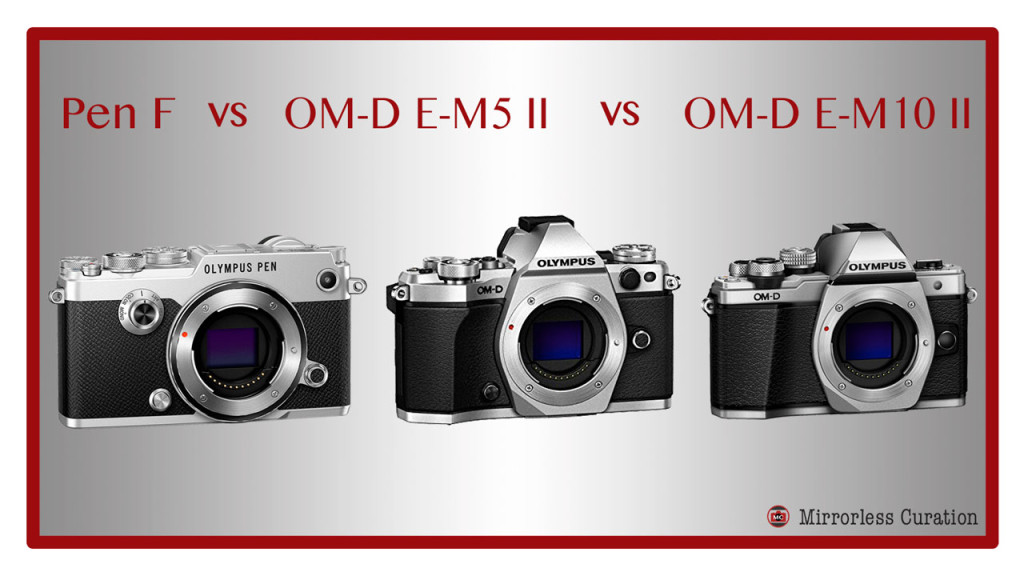 Although the new Olympus Pen F has been given the Pen denomination, it is fair to say that, rangefinder design aside, it has more in common with its two cousins in the OM-D range, the E-M5 II and E-M10 II, than the previous Pen models.

Admittedly, we haven’t had the chance to use all three cameras at the same time but since we spent some time with the Pen F at the press event and tested both the E-M5 II and E-M10 II extensively, we have a pretty good idea of how these three models compare.

With that said, let’s have a look at the Pen F and its main competitors within the Olympus range!

Ethics statement: The following list is based upon our experience with Olympus cameras. We were not asked to write anything about these cameras, nor were we provided any compensation of any kind. All opinions we express are our own. Within the article, there are affiliate links. If you buy something after clicking the link, we will receive a small commission. To know more about our ethics, you can visit our full disclosure page. Thank you!

The E-M5 II is the heaviest body of the three, followed by the Pen F and the E-M10 II. The dimensions, however, are quite comparable. The Pen F is the longest, the E-M5 II the tallest and the E-M10 II the thickest. All three come in black or black/silver.

The Pen F has a rangefinder design with the EVF on the left. Its design was inspired by the original Pen F film camera. It is decidedly the most elegant of the three models. They are all available in black only or black and silver.

The E-M5 II and E-M10 II are obviously much more similar. Their design is based on the original Olympus OM film cameras, with a fake pentaprism in the middle that houses an EVF. The E-M5 II is the only body of the three that is weather sealed and has the advantage of a more substantial grip.

All three models are abundant in dials and buttons that improve the user experience. They all feature a mode dial, twin dials to change exposure (shutter speed and aperture) and a number of function Fn buttons. Of the three, the E-M5 II has the most customisable Fn buttons (six in total) and the Pen F’s mode dial is the first to have custom settings (dubbed My Mode).

The Pen also has the added bonus of a dedicated exposure compensation dial (±3EV) and a creative dial on front for art filters/colour creator and two new features, Colour Profile Control and Monochrome Profile Control.

On the rear, all three cameras have a very similar layout. The right is occupied by the Menu, Info, Delete and Playback buttons that surround the 4-way control pad. The main difference between the control pad of the Pen F and the two OM-Ds is that the former has been assigned different functions such as ISO/WB, flash, burst shooting/timer and AF point.

Only the E-M5 II has a lever on the rear that allows you to change the functions of the twin dials between shutter speed/aperture and ISO/white balance, a feature inherited from the flagship E-M1.

On the left of all three cameras is a 3-inch 1,037k dot touchscreen. While that of the E-M10 II only tilts up and down, the E-M5 II and Pen F have a vari-angle screen that suits video shooting.

On the Pen F and E-M10 II, there is an AF Targeting Pad option that allows you to choose the focusing point through the touchscreen while using the EVF.

As mentioned above, all three models have a built-in EVF with 100% coverage and 2.36 million dots of resolution but E-M5 II’s viewfinder has the largest magnification. They offer a Simulated OVF option, which expands the dynamic range of the camera’s EVF to make it behave more like an OVF.

All three cameras feature a Micro Four Thirds sensor and omit the optical low-pass filter but at 20MP, the Pen F has the most resolution. They are all equipped with the same TruePic VII image processor.

Both the E-M5 II and Pen F have a new setting called High Res Shot, which composites eight shots into one high resolution file. While the E-M5 II generates a 40MP JPG file and a 64MP Raw image, the Pen F’s extra native resolution gives you a 50MP JPG and a 80MP Raw file. Since the technology combines eight shots, you must use a tripod and there must not be any movement in your composition for it to work properly.

The Pen F has another small advantage over the OM-Ds in that its lowest ISO value is 80 rather than 100. These sensitivities are available in both Raw and JPG format on all three cameras.

The three models have an identical contrast detection autofocus system with 81 area multi AF points. You have the option of: All target, Group target (9‑areas), Single target (normal), and Single target (small).

The fastest mechanical shutter speed of the Pen F and E-M5 II is also higher than that of the E-M10 II (1/8000s vs 1/4000s), but the fastest shutter speed in silent and first curtain modes is the same.

According to the official specifications, the Pen F has the “shortest release time lag between pressing the shutter release button and the actual shot,” making it faster than both OM-D models. The AF spot metering can also be linked to the AF point on the Pen.

Finally, all three models have Face and Eye detect AF, which means that the camera can recognise and automatically focus on the face or eye of a person.

Video and other features

All three cameras offer the possibility to shoot at up to 1060p/60fps with an All-Intra compression option and clean HDMI out. As mentioned above, you can use the 5-axis stabilisation with video (M-IS1 or M-IS2). There is also a 4K Timelapse mode at 15fps.

In terms of video features, the E-M5 II is more advanced than either the Pen F or E-M10 II. With firmware update 2.0, it received features specifically related to movie recording, including Slate tone feature (matches in-camera audio wavelengths with the Olympus LS-100 audio recorder), Flat Picture and Movie Noise Feature modes, and synchronisation of start/stop of movie sound recording when using the linear PCM recorder LS-100. It also has a microphone input.

However, the E-M10 II has a video feature its cousins don’t have, slow motion recording at 120fps.

Although the Pen F and E-M5 II use the same BLN-1 battery, the former can take 330 frames on one charge while the latter can only take 310 frames. The E-M10 II uses a different battery (the BLS 50) and can take up to 320 frames.

All three models offer built-in WiFi and compatibility with the free OI.Share 2.6 app.

If you’ve read this three-way spec comparison from start to finish, you’ll have come to the same conclusion we have: the Pen F, E-M5 II and E-M10 II are far more similar than they are different.

If you are just as serious about video shooting as you are about still photography, the ideal model is the OM-D E-M5 II because of vari-angle touchscreen and the extra video features it offers. That said, since the basic video specs are the same on the three models, it would not be a mistake to choose the Pen F or E-M10 II for their video capabilities as well.

For still shooters, things get more confusing. Still life photographers will certainly appreciate the High Res modes found on the Pen F and E-M5 II but the E-M10 II comes at a very appealing price, and could be considered better suited to still photography because of the tilting screen.

Then there is the design and the location of the electronic viewfinder. Those who prefer an SLR-like design with the EVF in the centre will certainly prefer one of the two OM-Ds, while rangefinder aficionados will love the look of the Pen F.

In the end, it all comes down to the kind of shooting you enjoy (stills or video), the design that appeals to you the most, and of course, how much you are willing to pay.

You can find all three Olympus models at B&H Photo.