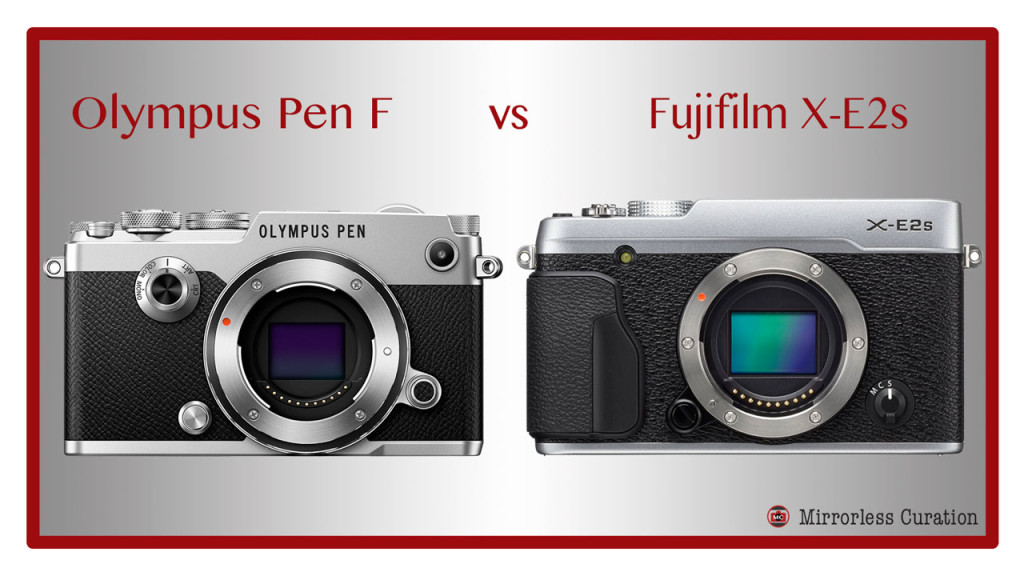 The new Olympus Pen F was designed to be a major competitor in a specific segment of the market where digital cameras have a rangefinder design style with the viewfinder positioned on the left (although the Pen F is inspired by the original Pen F SLR film camera). Fujifilm was among the first to believe in this idea with the X100, X-Pro and X-E series.

Now that both brands have introduced their newest cameras, it is interesting to see how the new Pen F compares to its main competitor from the Fujifilm line-up, the X-E2s.

Ethics statement: The following is based upon official specifications and our personal experience with Olympus and Fujifilm cameras. We were not asked to write anything about these cameras, nor were we provided with any sort of compensation. Within the article, there are affiliate links. If you decided to buy something after clicking the link, we will receive a small commission. To know more about our ethics, you can visit our full disclosure page. Thank you!

The Pen F is slightly smaller and heavier than the X-E2s. The latter has a more prominent grip on the front. The Pen F has one available as an optional accessory (the ECG-4 L plate).

The Pen F was inspired by the original film camera. The X-E2s was inspired by rangefinder models but embodies a simpler design. Both cameras are available in two colour combinations: black and black/silver.

The Pen F has a magnesium and aluminium body (including the dials) and the singularity of having no visible screws on any side of the camera. However it is not weather sealed, a characteristic also shared by the X-E2s. The Fujifilm camera’s top and front covers are made of lightweight and highly rigid die-cast magnesium.

The Pen F has a unique Creative dial on the front of the camera that allows you to switch between different colour and effect profiles. We can notice the exposure compensation dial on top and the threaded shutter release button that can host a soft release button. The On/Off switch on top is also another nice “vintage” detail of the camera.

The X-E2s also has a threaded shutter release button. We can appreciate the shutter speed dial on top as well as the exposure compensation dial. It has a handy focus mode selector on the front.

Both cameras feature a built-in EVF on the left rear side of the body with the same resolution and magnification. While we don’t know the lag time value for the Pen F, for the X-E2s it is only 0.005s with refresh rate of 60fps. The Pen F like many other Olympus cameras has a high frame rate mode that goes up to 120fps (but it drains more battery).

The Pen F has 4 custom buttons and the D-pad on the rear can also be customised. There are 4 custom settings accessible from the Mode dial on top. The X-E2s has 7 customisable function buttons (including the D-Pad) and a Command dial on the rear.

The Pen F rear monitor can be flipped to the side and rotated, a solution that will satisfy video users. The screen is also touch sensitive: you can change your focus point, take a shot or use the monitor as a virtual AF pad while framing with the EVF. The X-E2s LCD is fixed and lacks touch capabilities.

Both cameras include a hot-shoe mount on top. The Pen F lacks a built-in flash but is supplied with a small external unit (FL-LM3). The fastest speed sync is of 1/250s but the Pen F can also go as fast as 1/8000s in Super FP mode with compatible flashguns. The X-E2s has a built-in pop-up flash on top and the max sync is 1/180s.

The Pen F has more resolution but a smaller sensor. In truth, we’ve never found drastic differences between Fujifilm sensors and Micro Four Thirds. One of the most interesting differences is the extra shallow depth of field you can get with the Fuji system when using fast aperture lenses.

One annoying thing about the Fuji X-E2s is that the extended ISO values aren’t available for the RAW files. The Pen F on the contrary can shoot RAW and JPG files through the entire ISO range.

An interesting difference between the two cameras concerns the colour profiles (called Film Simulation modes on the X-E2s). Olympus has always rendered natural and vivid colours while Fujifilm tends to experiment with unique colour palettes, with profiles such as Classic Chrome and Astia being a good example. The Pen F has a new Monochrome Profile creator mode with different filters and options while the X-E2s has four black and white filters.

The Pen F has a unique feature called High Res Shot. By using the built-in sensor shift technology, the camera can combine 8 shots into a 50MP JPG file and an 80MP RAW file. Note that to achieve good results the camera must be  on a tripod and there must not be moving subjects in the scene.

The Pen F has a contrast detection AF system. You have the option of: All target, Group target (9‑areas), Single target (normal), and Single target (small). We have yet to see how it performs for Continuous shooting and tracking. At the press event we found it very fast in Single AF even in low light conditions.

The X-E2s has a hybrid AF system and the latest focus settings introduced on the X-T1 and X-T10 which include Zone AF and Wide/Tracking.

The Pen F has a faster continuous shooting speed in Single AF but the X-E2s can shoot at 7fps in Continuous AF. Note that the Pen F is compatible with UHS-II standard meaning it can use faster SD cards than the X-E2s (UHS-I only).

The Pen F features the best in-body image stabilisation system on the market (5-axis, 5 Ev of compensation like the E-M5 mark II). This is interesting because with the Pen F you can have stabilisation with any lens including adapted ones. The X-E2s relies on the optical stabilisation of selected lenses.

The Pen F can shoot Full HD up to 30fps with the All-Intra codec (72mbps) or up to 60fps in Super Fine quality mode. You also have the option to record short movie clips (4s) and rearrange them after to create an in-camera edited videoclip. The camera can also record time-lapse videos up to 4K but with  a limited frame rate (5fps).

The X-E2s can record Full HD up to 60fps in MOV format.

The Pen F has 6 bracketing modes including Exposure (up to 7 frames, 1Ev step) and Focus Bracketing (up to 999 shots). The camera can also take multiple exposures (up to 3 shots) and has a Photo Story mode that allows you to combine 3 shots together into one frame.

The X-E2s has 5 bracketing modes (AE up to 3 shots, 1Ev), multiple exposure and a Panorama mode (JPG only).

Finally, both cameras have Wifi capabilities. 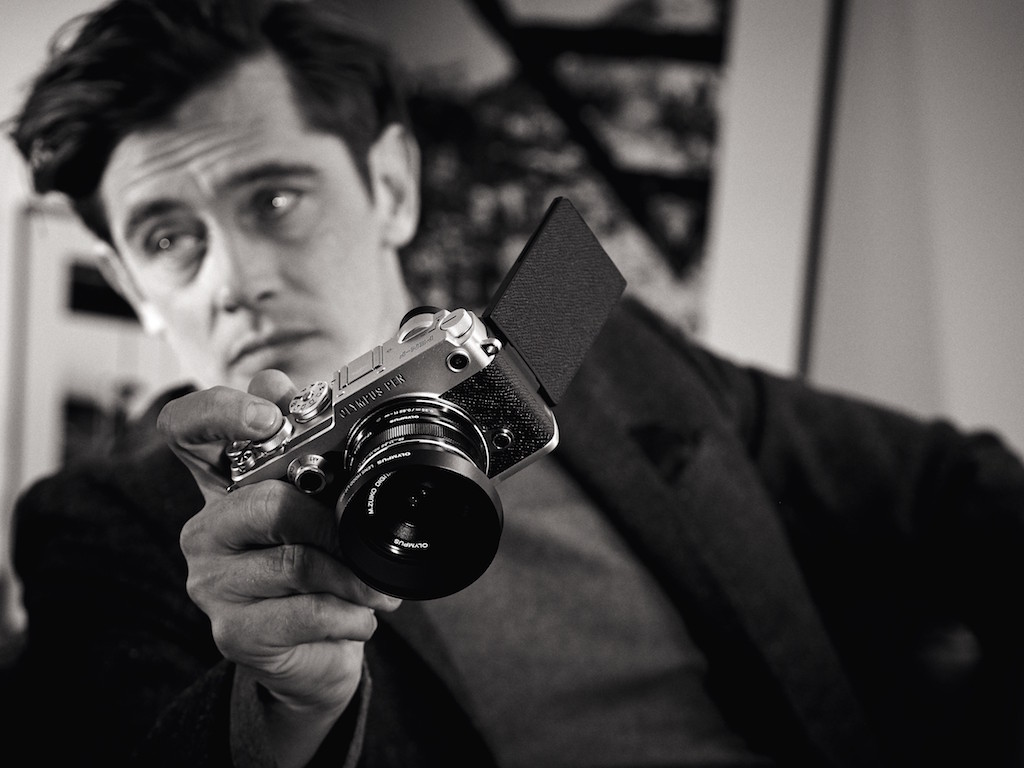 Only a complete comparison with side-by-side sample images can give you a more comprehensive view of what these two cameras have to offer, especially if we consider that the Pen F sensor is brand new.

Both cameras have a similar rangefinder design but we can find relevant differences in the autofocus system, image stabilisation and colour profiles. The Pen F also has some extra functions like High Res Shot and Focus Bracketing. 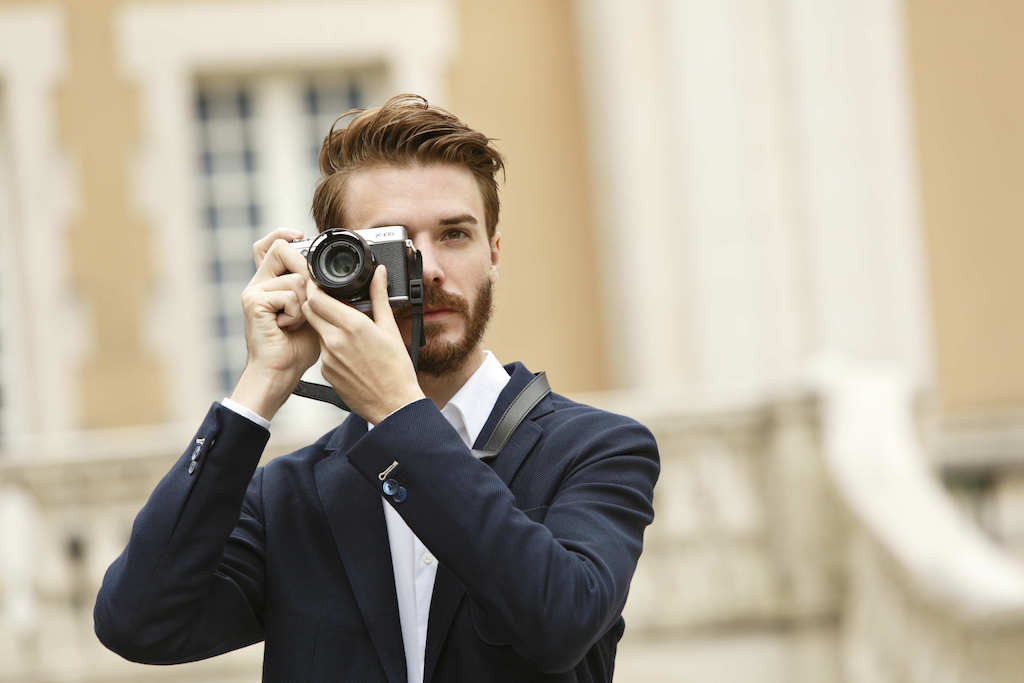 Check price of the Pen F on B&H Photo

Check price of the Fujifilm X-E2s on B&H Photo

A note about the Fujifilm X-E2:

The Fujifilm X-E2 will soon receive a new firmware update (version 4.0) that will put the camera on the same level as the X-E2s including the Autofocus options. The only relevant differences concern the re-designed grip on the front and the improved optical elements inside the EVF. The X-E2 is currently available at $675, £429, €515 (body only) which makes it the most affordable option out of the three.

Below you can find interesting reviews about the two cameras: